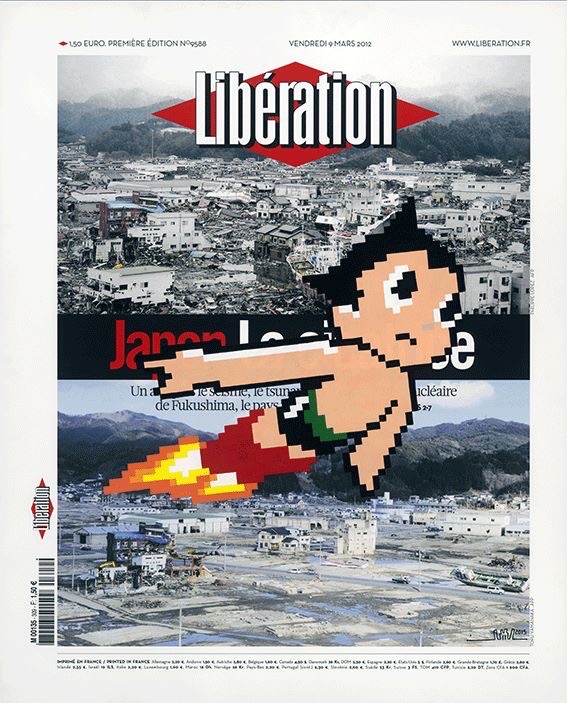 1996 First space invader posed in an alley of the XIth district of Paris.

1998 The Invasion really begins. The mosaics multiply in the capital, then very quickly in the rest of the world.

2005 Creation of Rubikcubism. Invader seizes the puzzle of the 80s to create pixelated tables.

June 11th, 2011 Invasion of the Week-end edition of Libé. Space invaders appear on the front page and are embedded in the titles.

August 20, 2012 First foray into space. The SpaceOne mosaic is sent into the stratosphere using a weather balloon. A film, Art4Space, tells the story of this adventure.

July 2014 Launch of the Flashinvaders app. It allows, by flashing the mosaics, to identify them and accumulate points.

March 12, 2015 Italian astronaut Samantha Cristoforetti fixes the mosaic "Space2" on a door of the Columbus module of the International Space Station. Invader becomes the first artist to exhibit at 400 km from earth.

"When I look at this image, I see it as a curtain-raiser on a huge catastrophe. This one "Fukushima" touches me more than another because, a few months before, I was in Japan. So I lived through the nuclear accident with a particular look, I felt close to it. And then, let's say it, I can't escape this very human fascination for the catastrophic, for the sublime of the destruction, for this atmosphere of the end of the nuclear world. Some time later, I returned to Japan. On the program: a new invasion of Tokyo. This series of mosaics was very much influenced by Fukushima. In addition to several phosphorescent mosaics, which radiate in the night, I have placed on a wall of the capital a Astroboy, in flight. The character ofAstroboya small iconic robot born in the Japanese manga of the 1950s, is actually called "Atome”. He carries a nuclear battery in him. Also, beneath his clean exterior, he is in fact animated by this demented energy. Moreover, in the Japanese series, just after its creation by a nice scientist, he does a lot of stupidities because he doesn't master his strength. In my eyes, he perfectly embodies the duality of this energy which is both attractive and terribly disturbing. Apart from Fukushima, which therefore caught me and inspired me, Japan has recently held a special place in my artistic career. My last Japanese escapade, in May 2014, went very badly indeed. My interventions in Tokyo generated a bewildering reaction from the authorities. I had never seen that in twenty-five years of street art. After my visit, some owners complained about my works on their walls. So far nothing exceptional, it happens often. Roughly speaking, each invasion results in about 10% loss. That is to say some mosaics quickly removed. Except that the Tokyo police, idle and perhaps bored, decided to take all this very seriously. Thanks to video surveillance cameras, they identified us. I had already returned to Paris, but they didn't miss my local associates. A fan of my work, met on the social network Instagram, and who helped me a lot in locating and setting up my invasion, was arrested and incarcerated. The poor guy was treated like a criminal: fifteen hours of daily interrogation, being asked over and over again, "Who is Invader and what do you know about him? For twenty days. A local photographer, who had followed my invasion, but also a gallery owner were also arrested. Same regime, twenty days of preventive detention. The authorities finally got my name. Today, I can no longer return to Japan. It pains me: Japan is still the country of origin of the space invaders. This is the first time I am telling this story publicly. At the time, my three "accomplices" asked me not to say anything, to protect their reputation and not to make things worse. I felt very helpless, from Paris, while they were crouching behind bars for unfortunate mosaics stuck on walls. Paradoxically, my pieces from Tokyo are very much appreciated. They are continuously photographed and flashed. Regarding my work on this front page, I hesitated about the medium. In the end, I chose, a rather rare thing, to intervene in painting. » 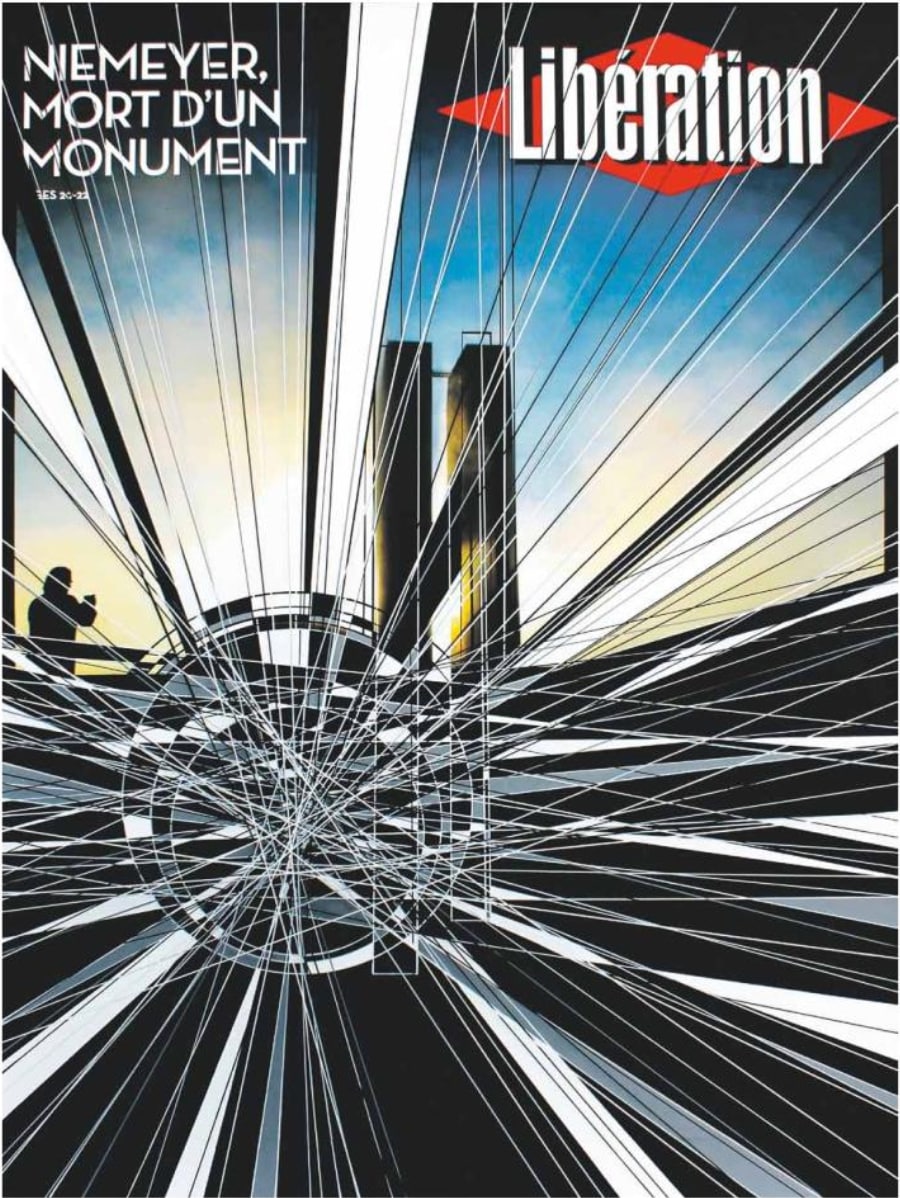 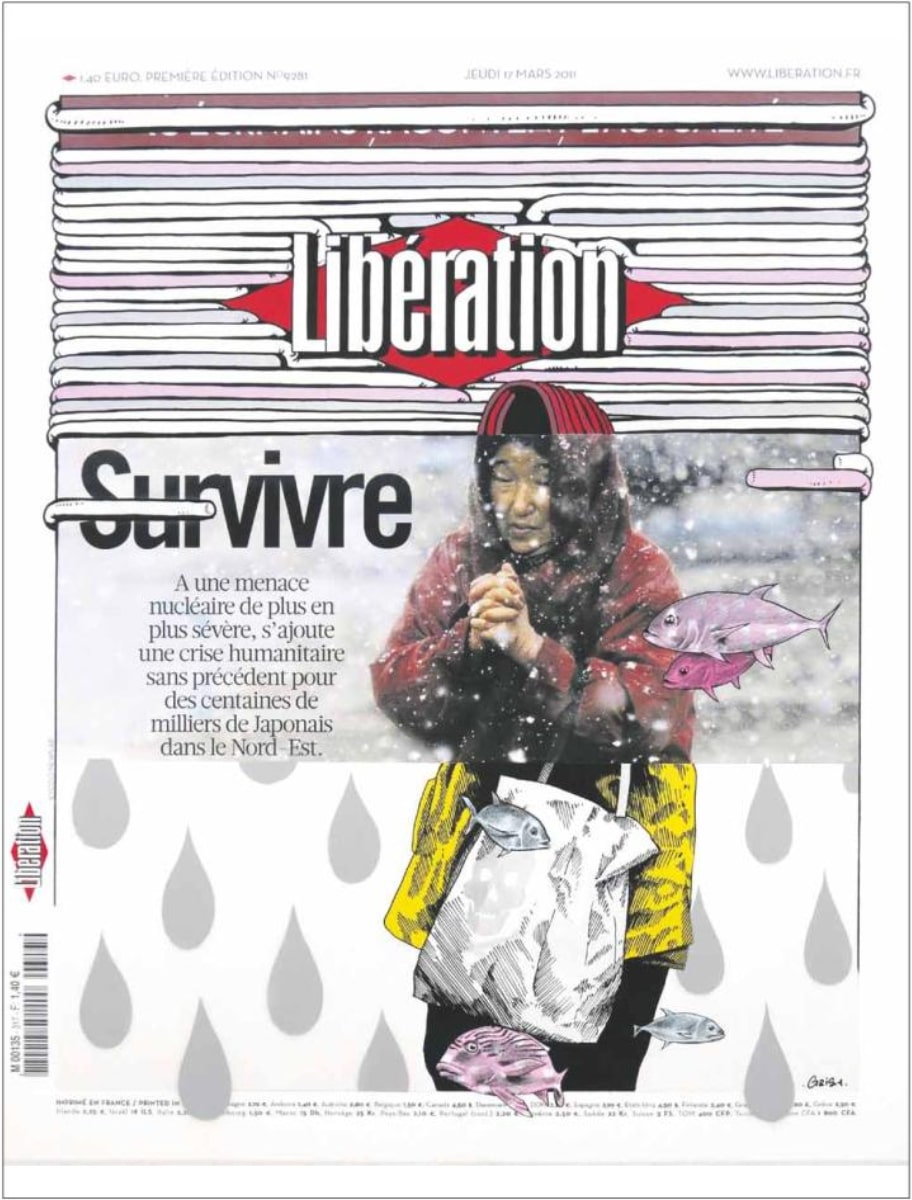 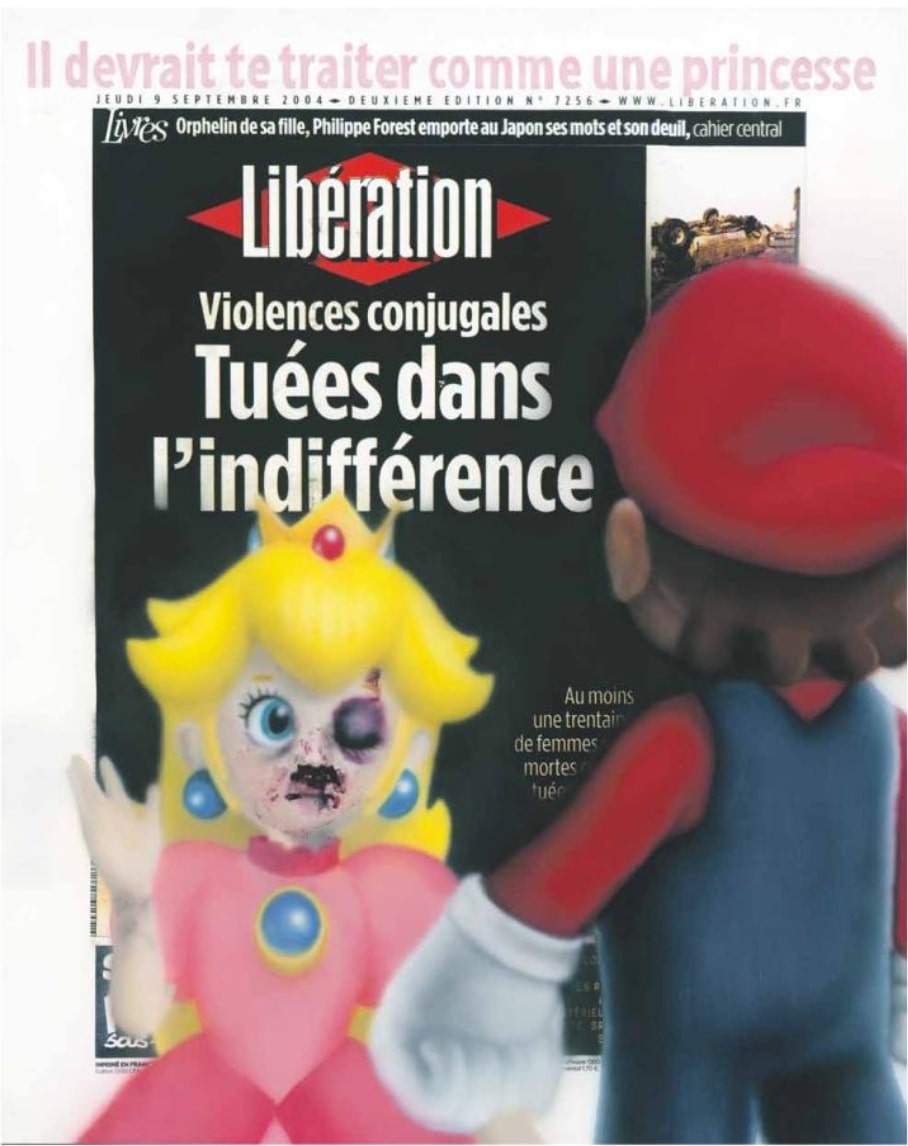 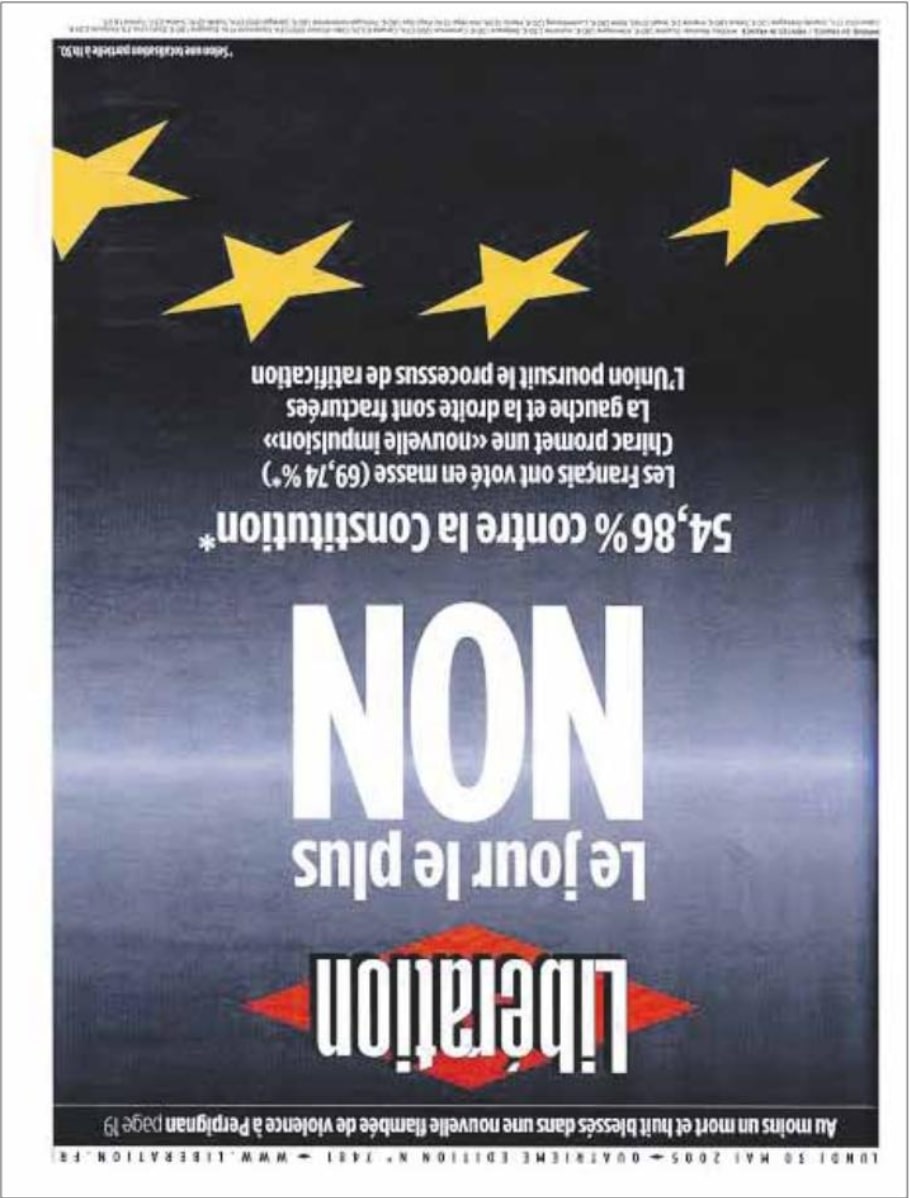 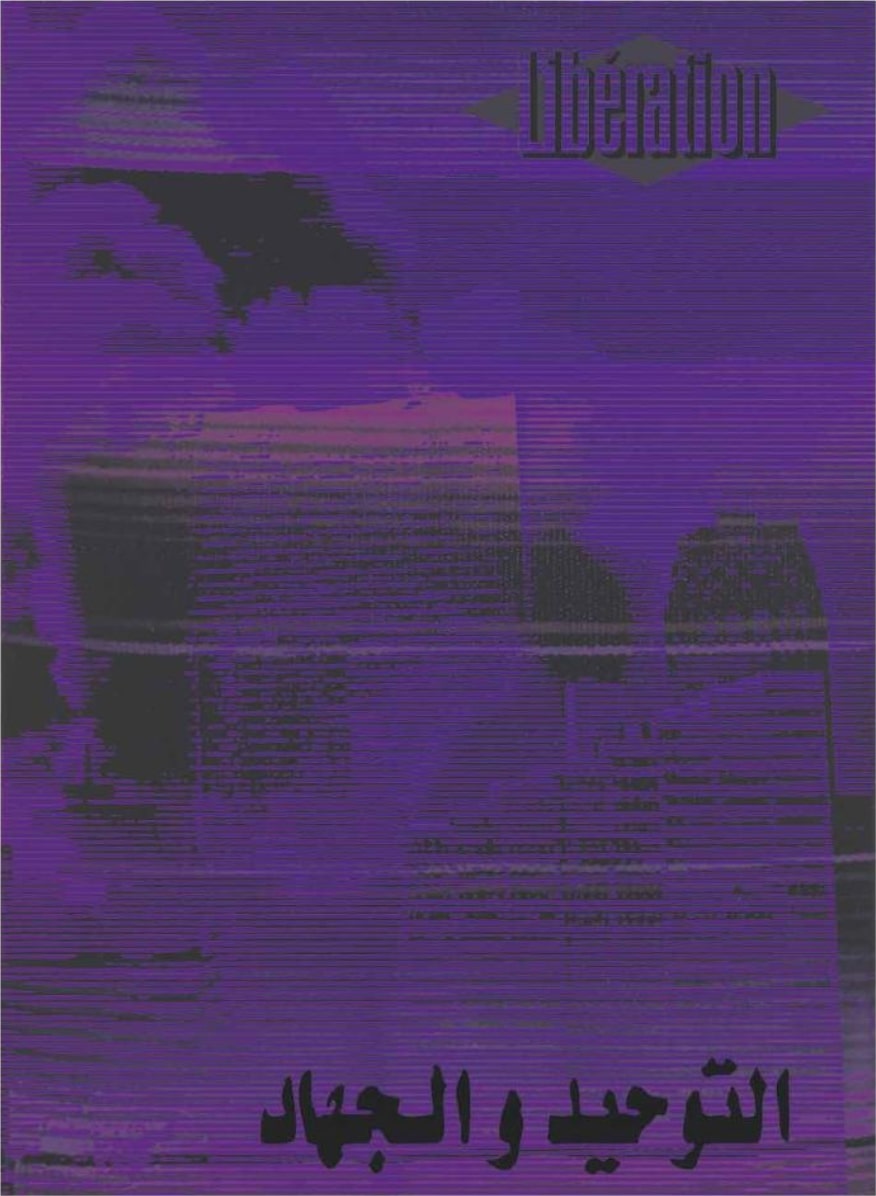 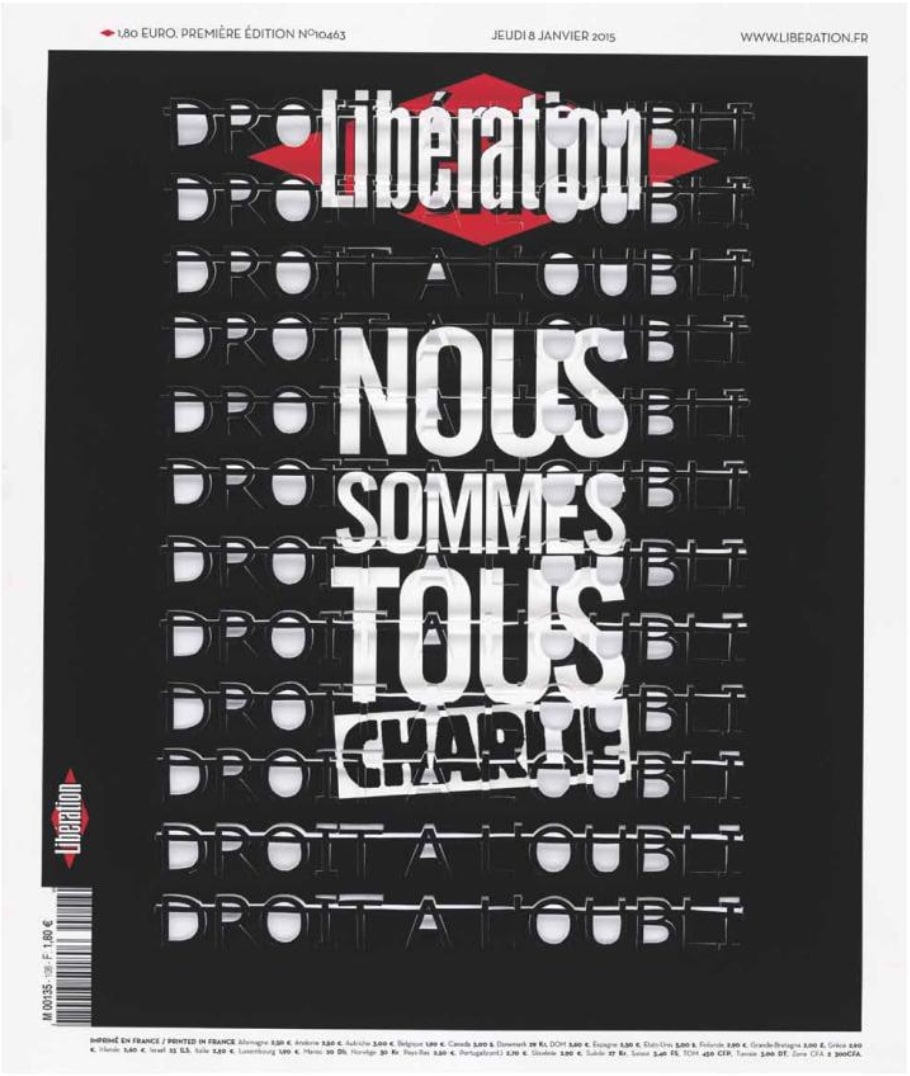 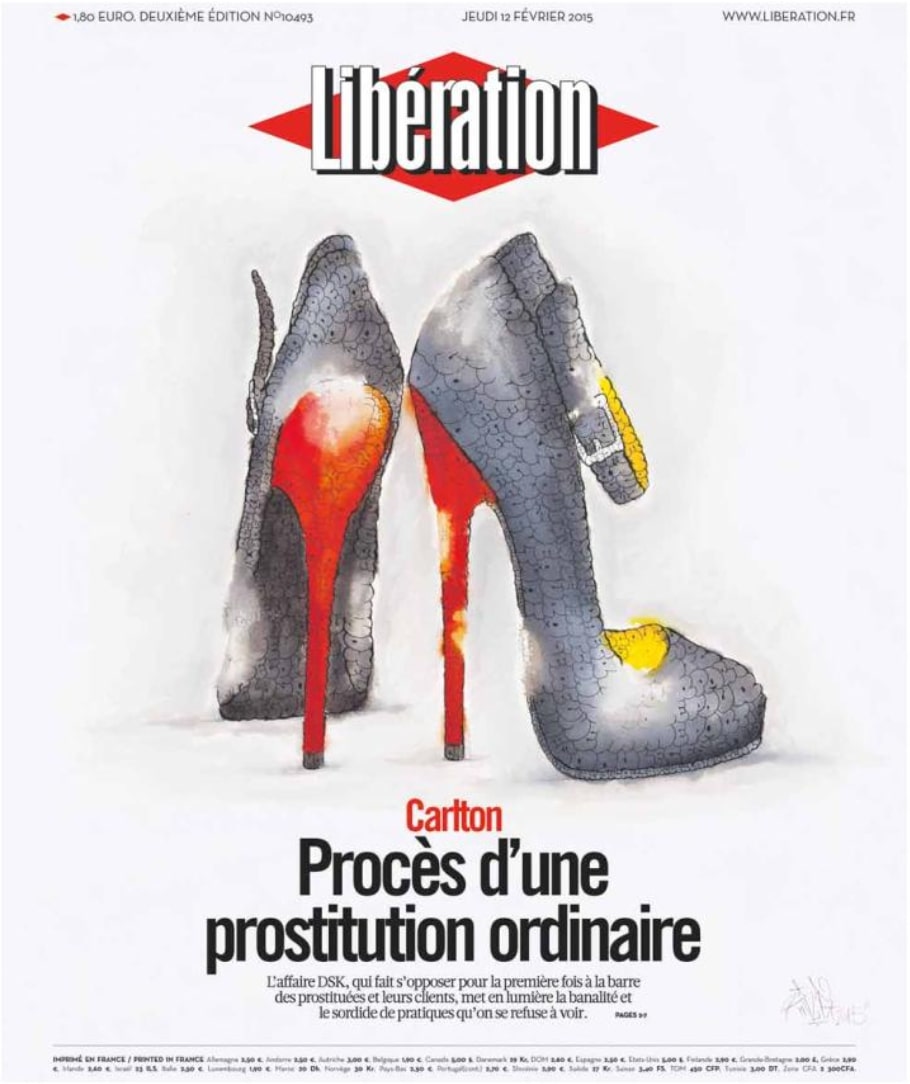 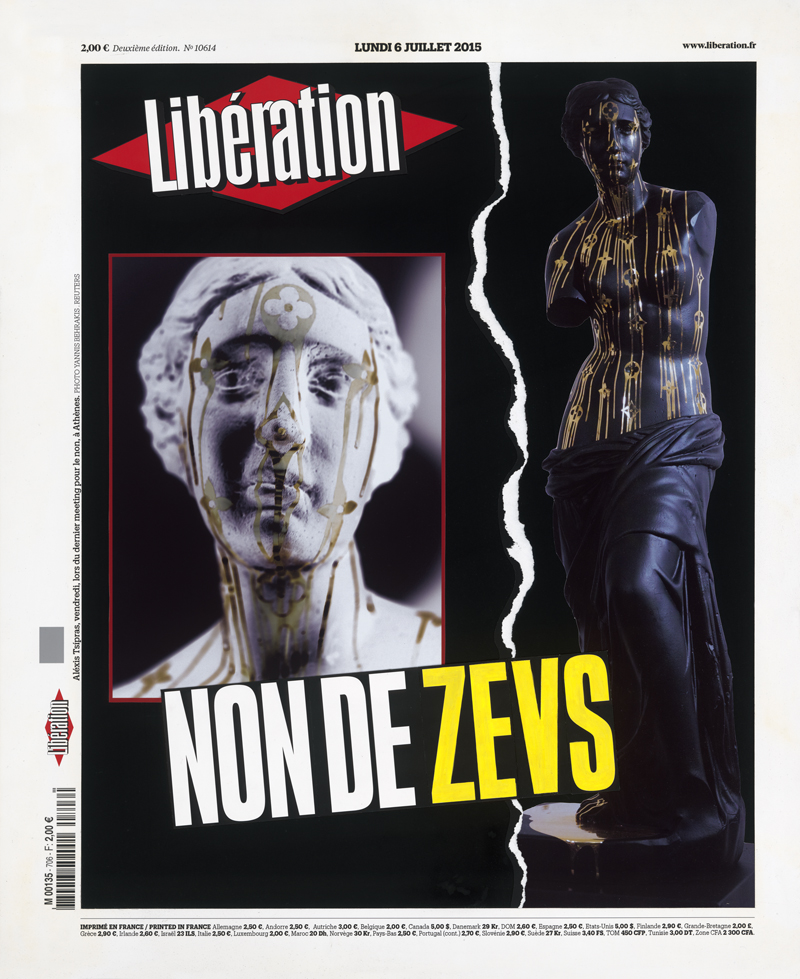 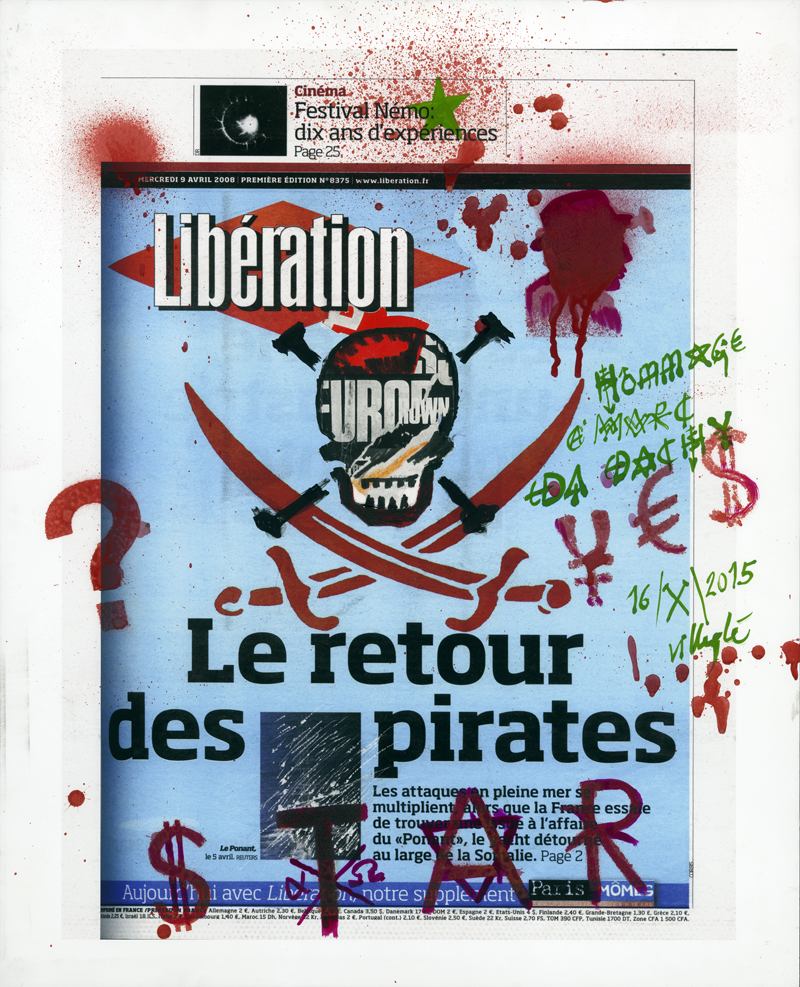 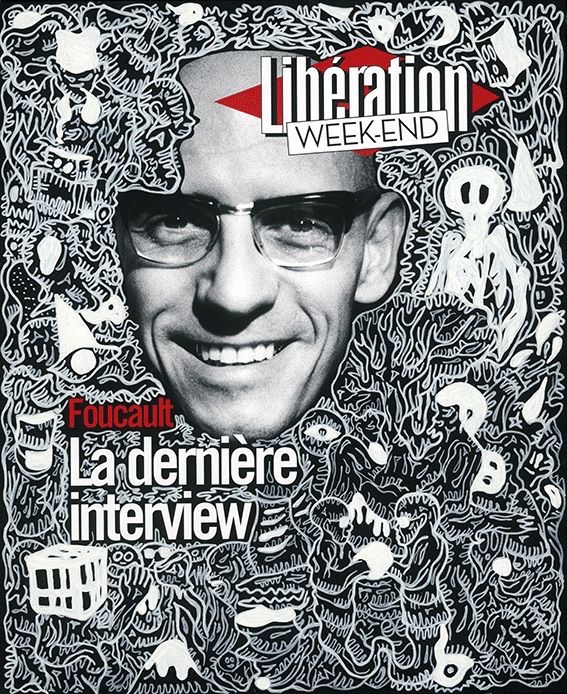 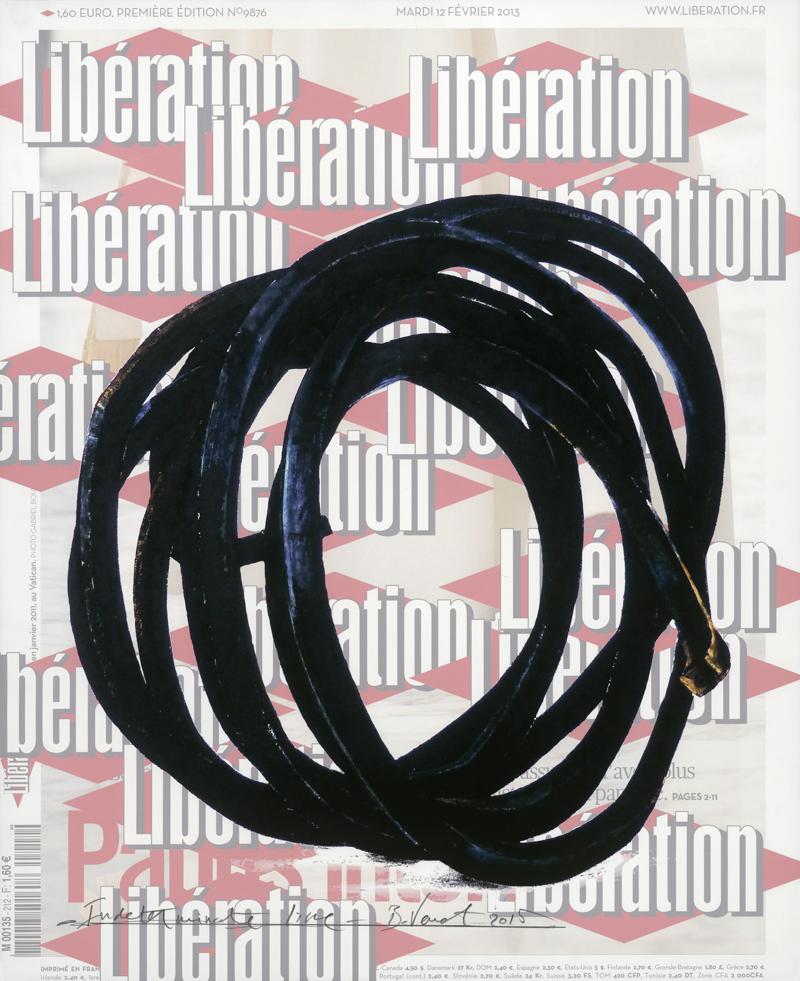 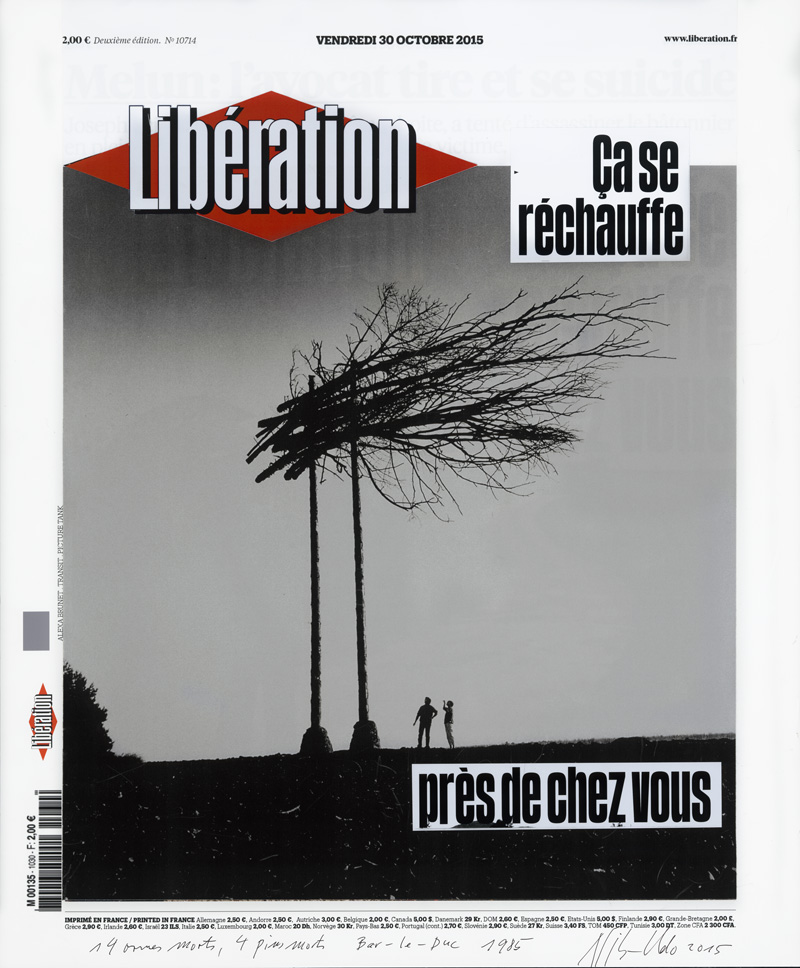 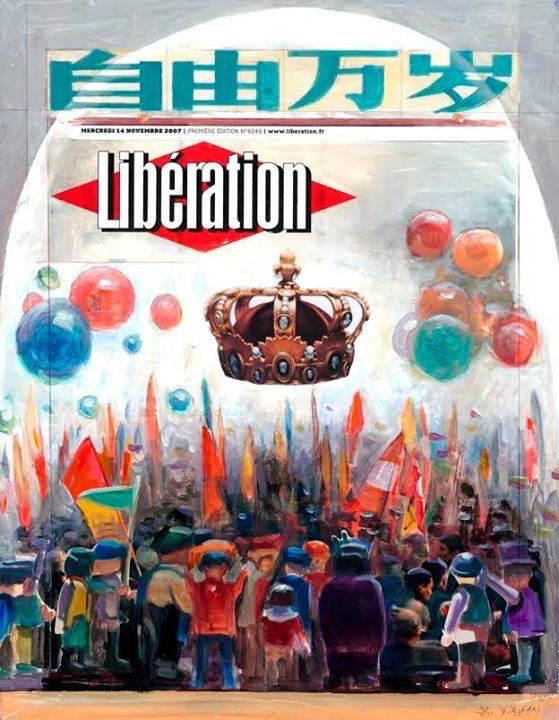 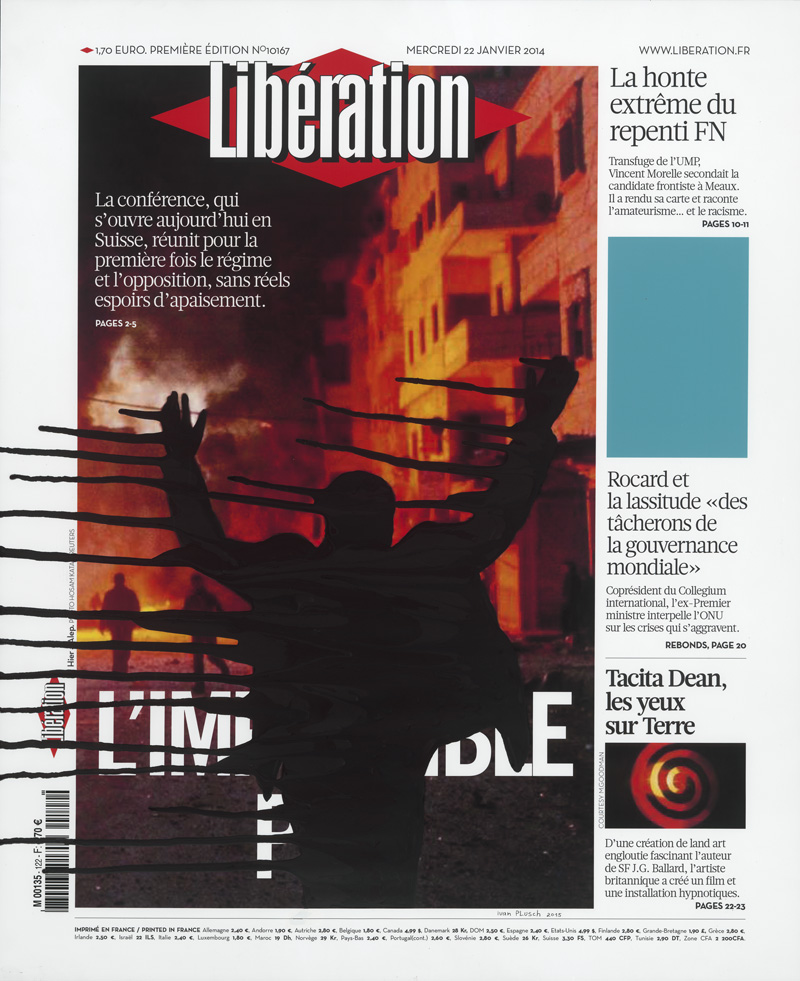 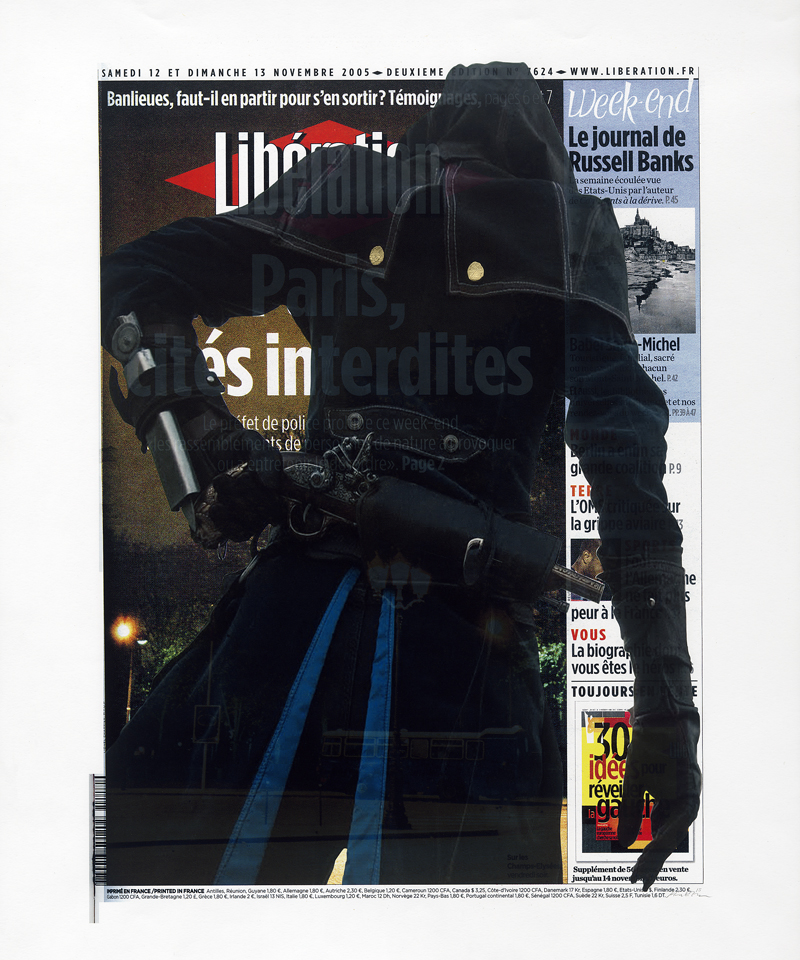 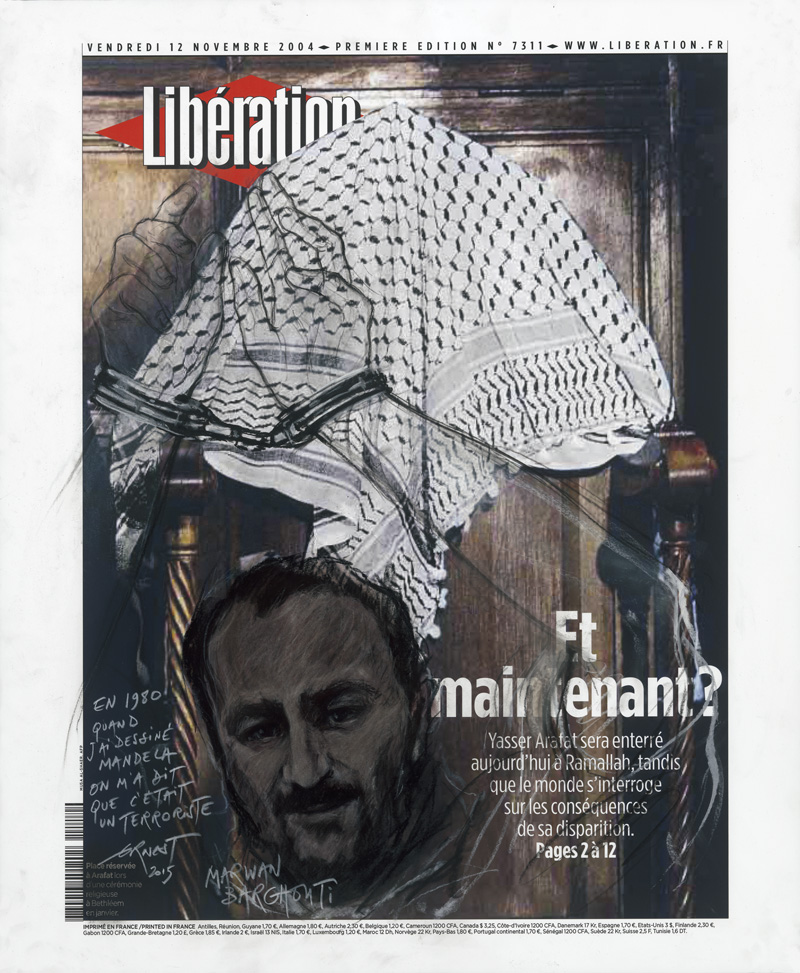 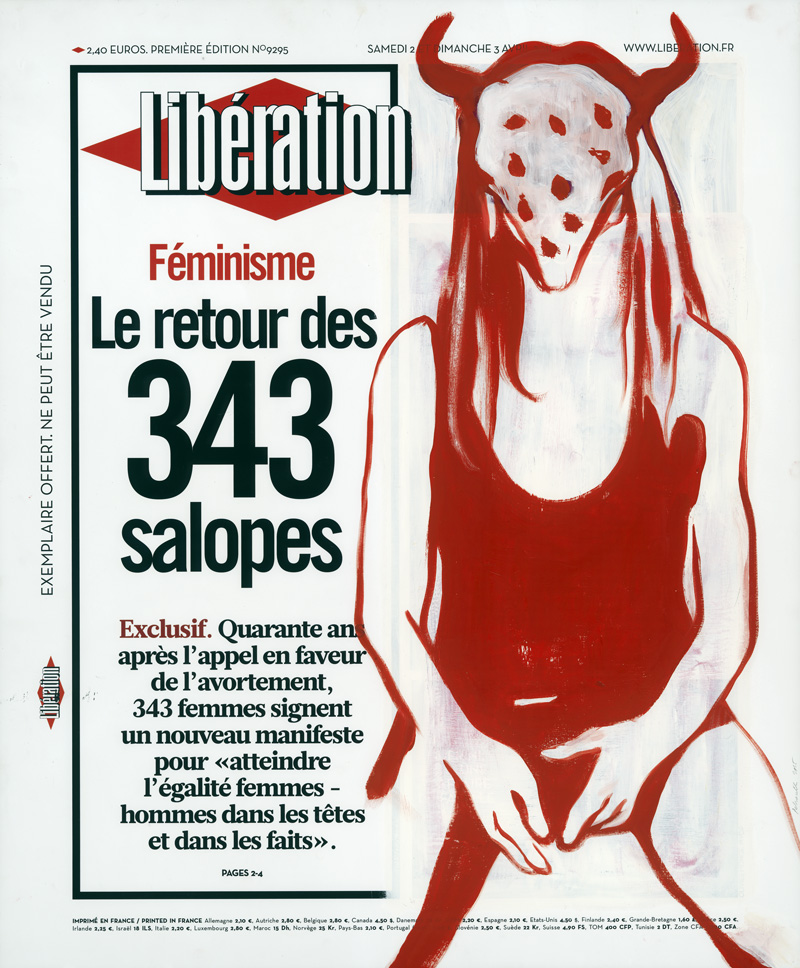 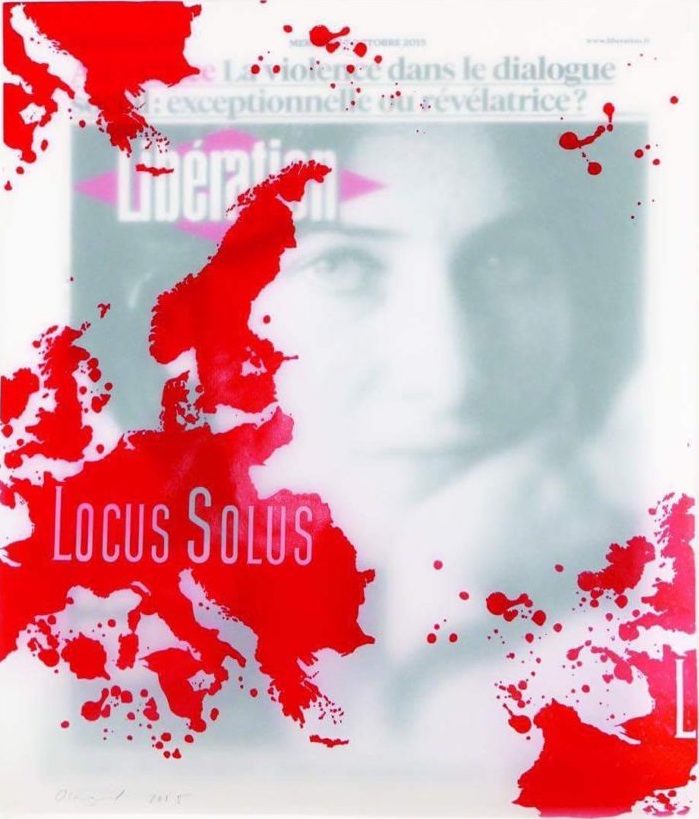 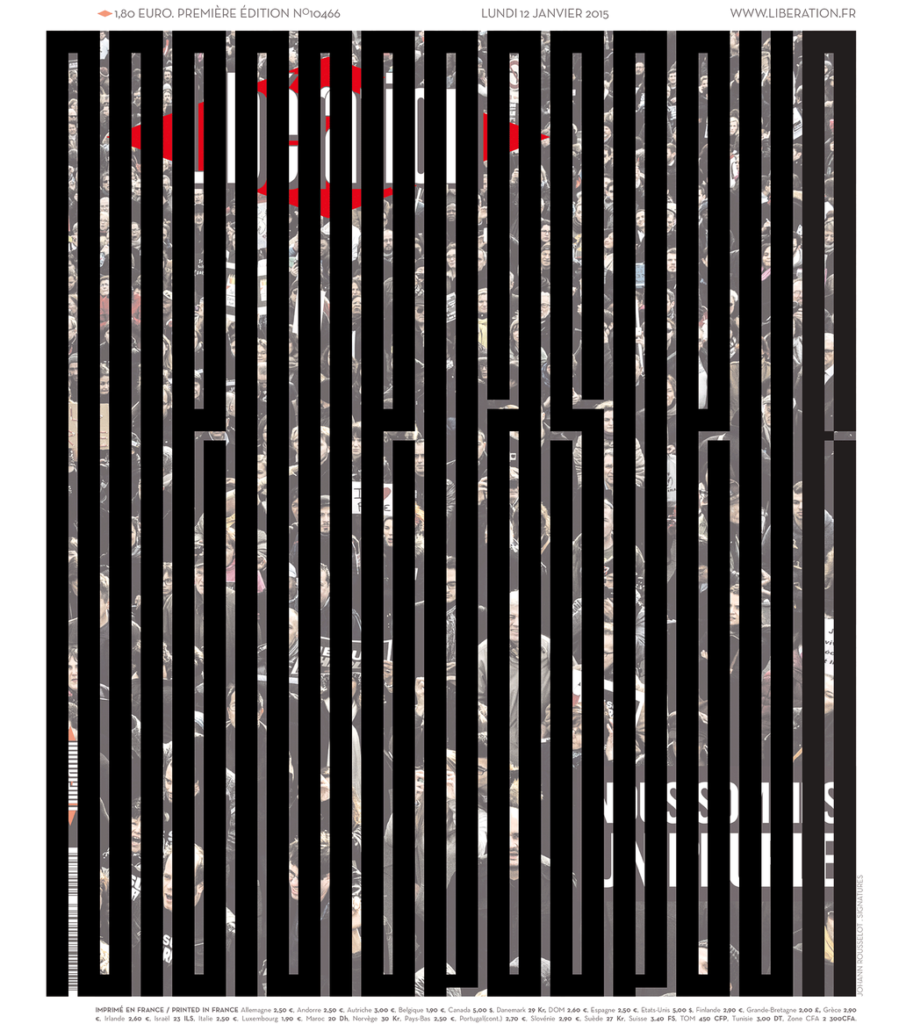 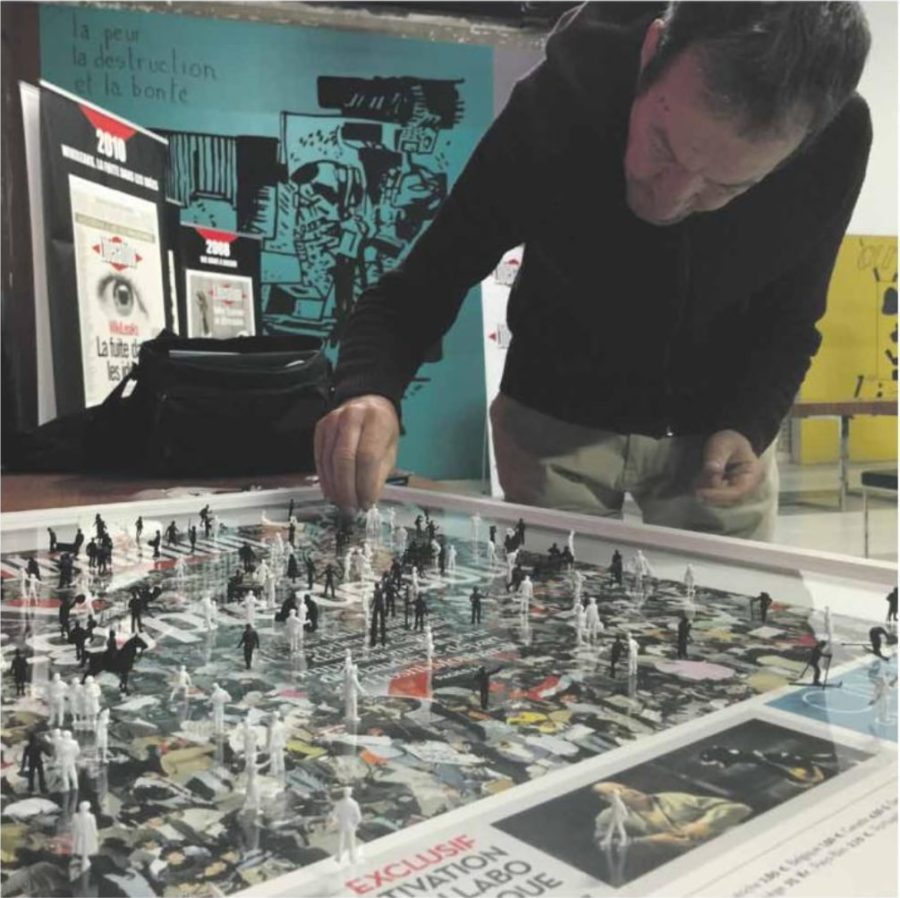 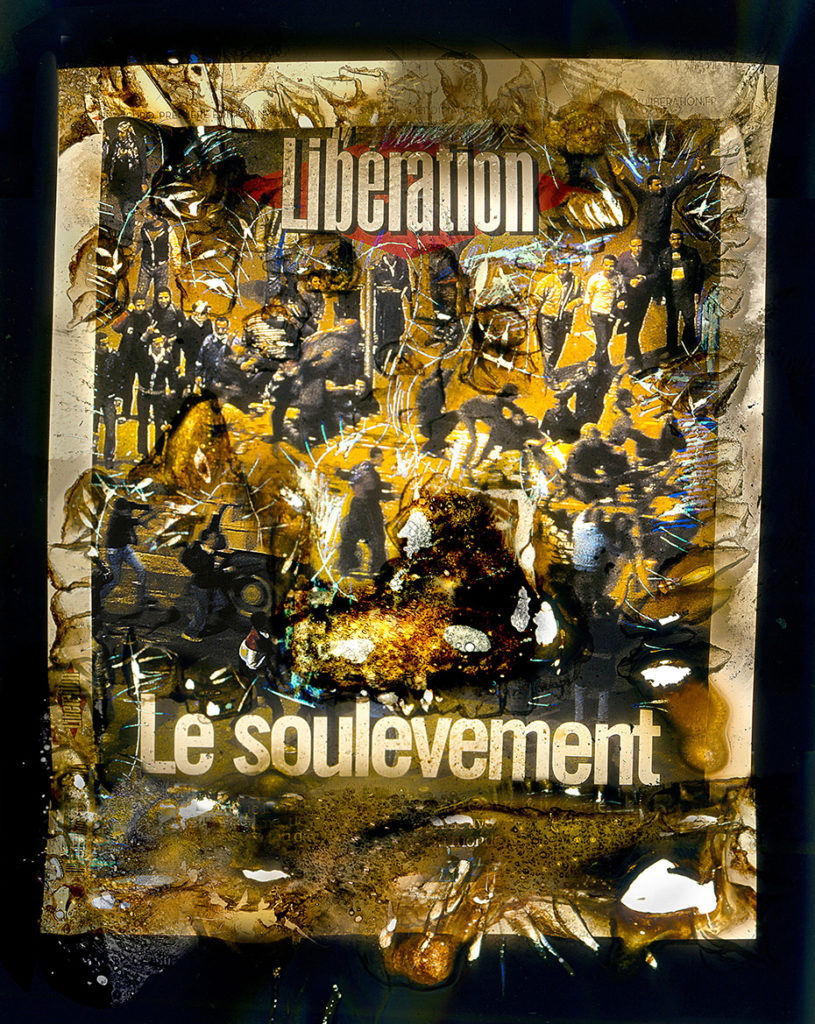 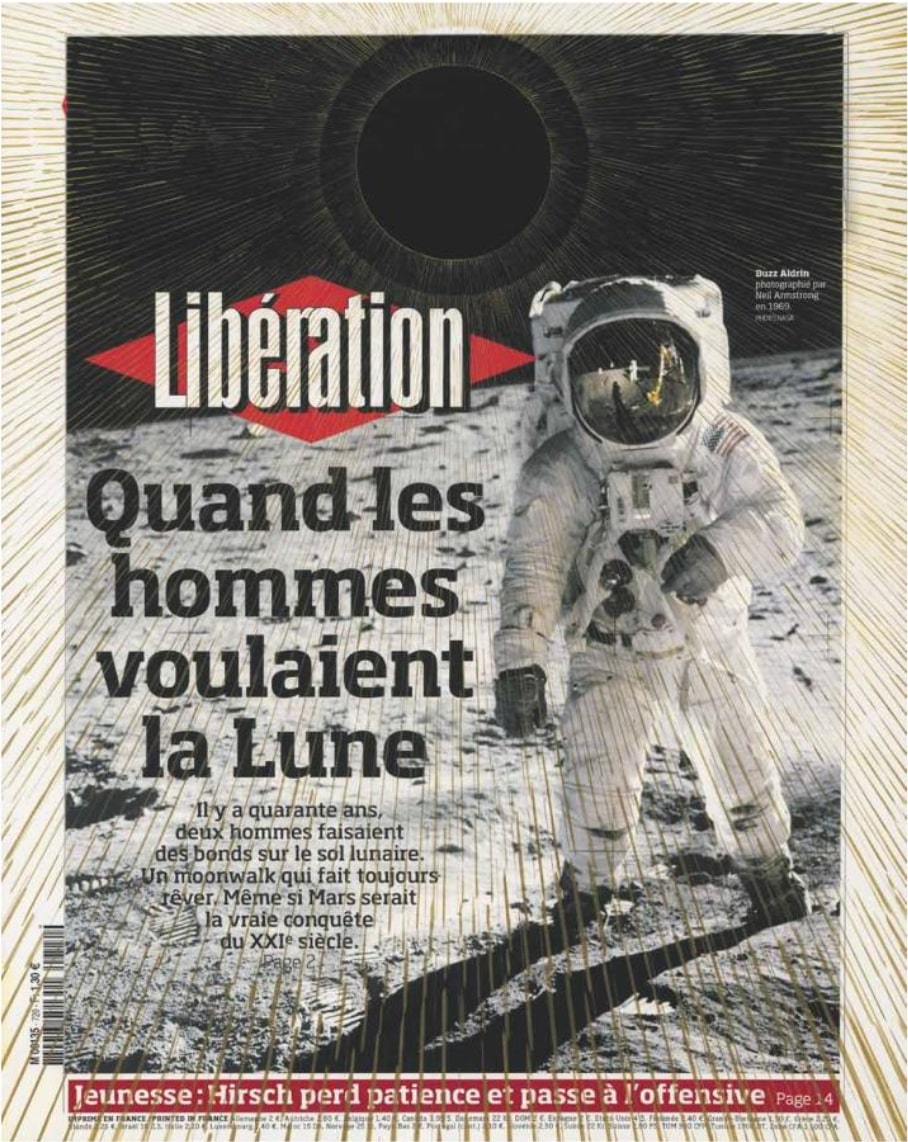 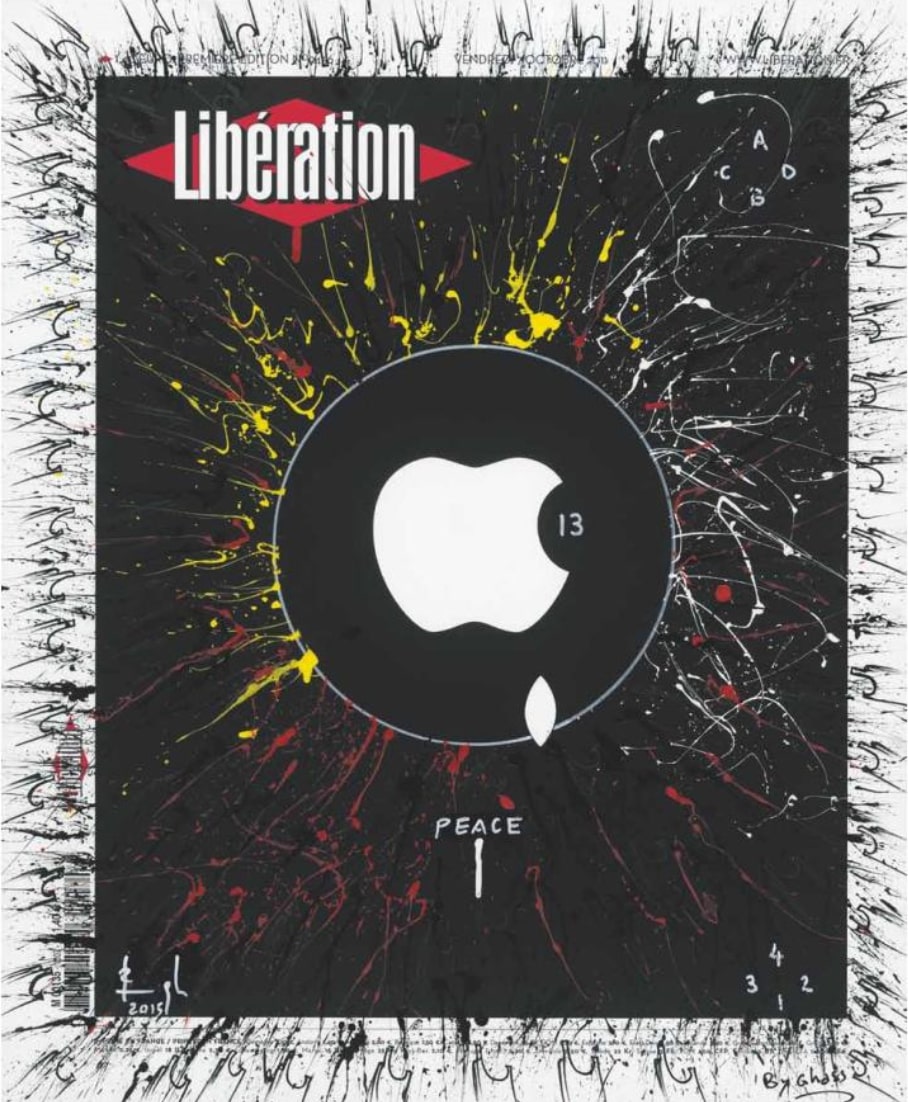 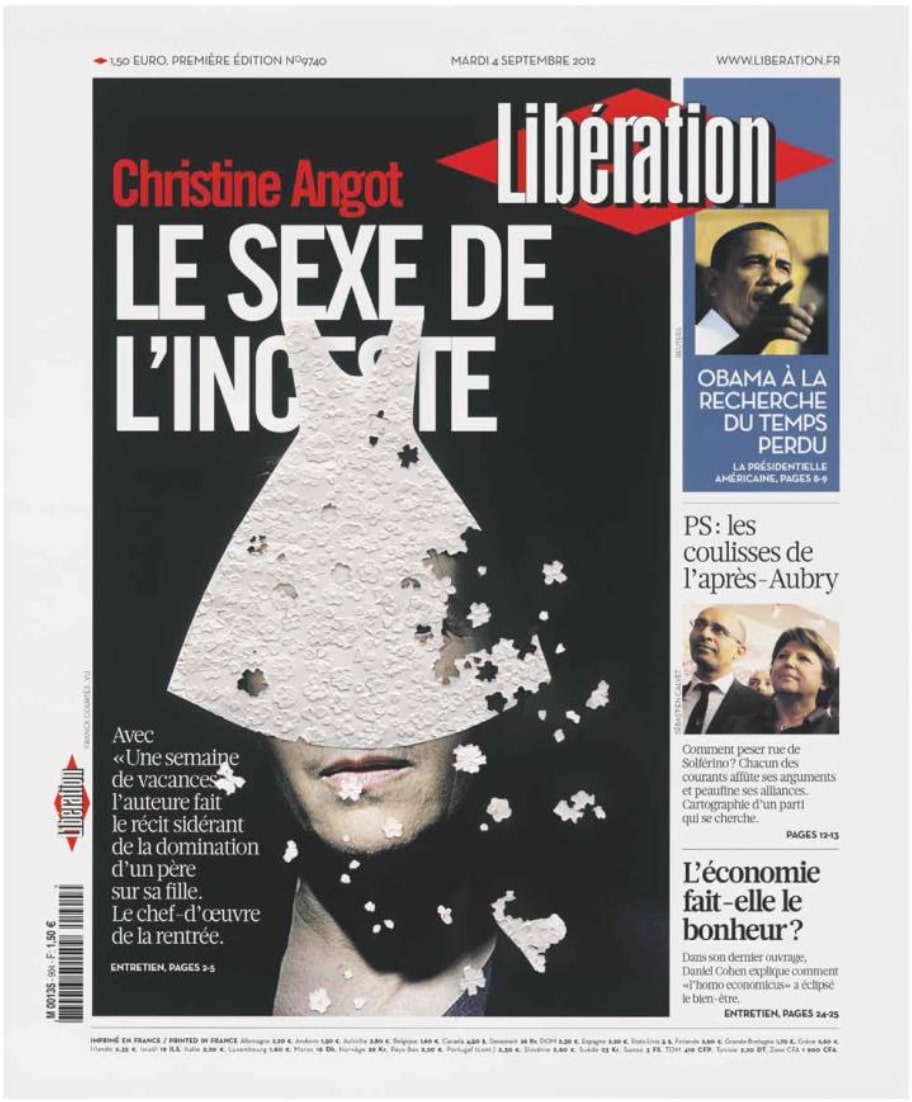 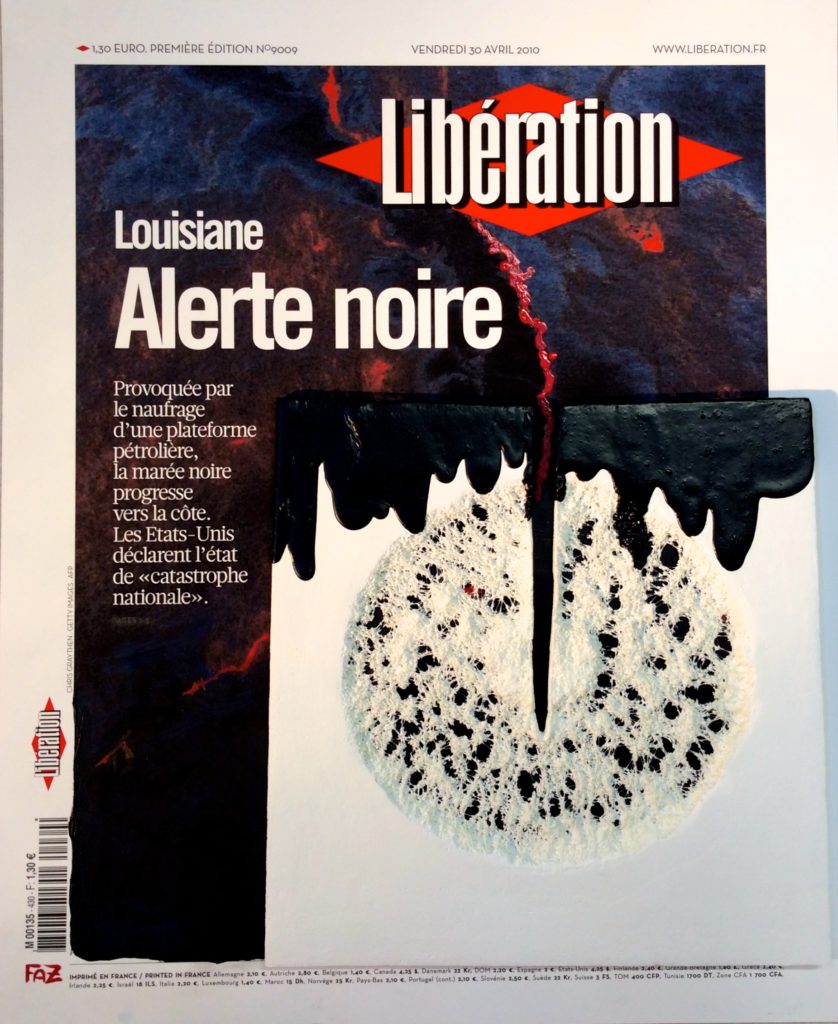 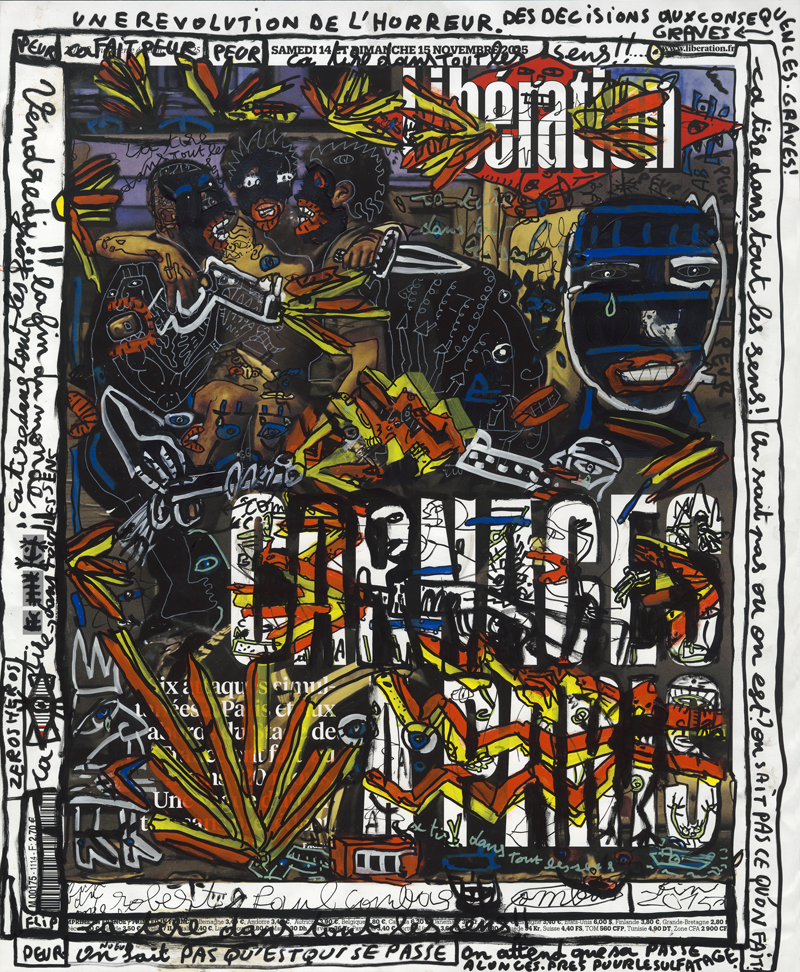 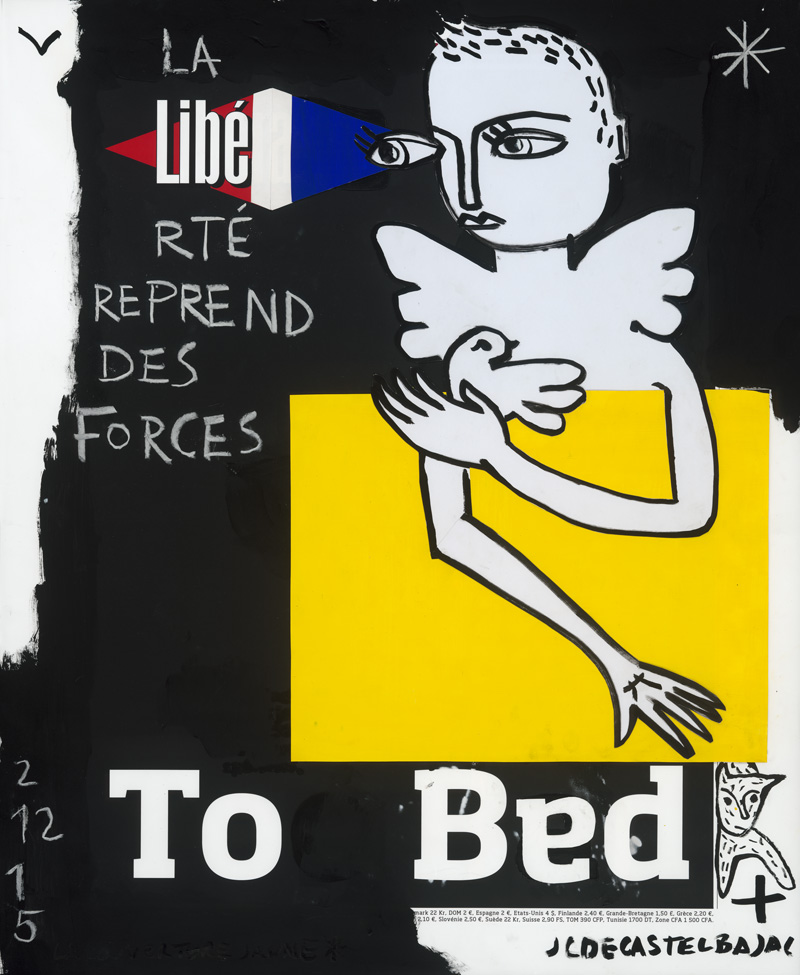 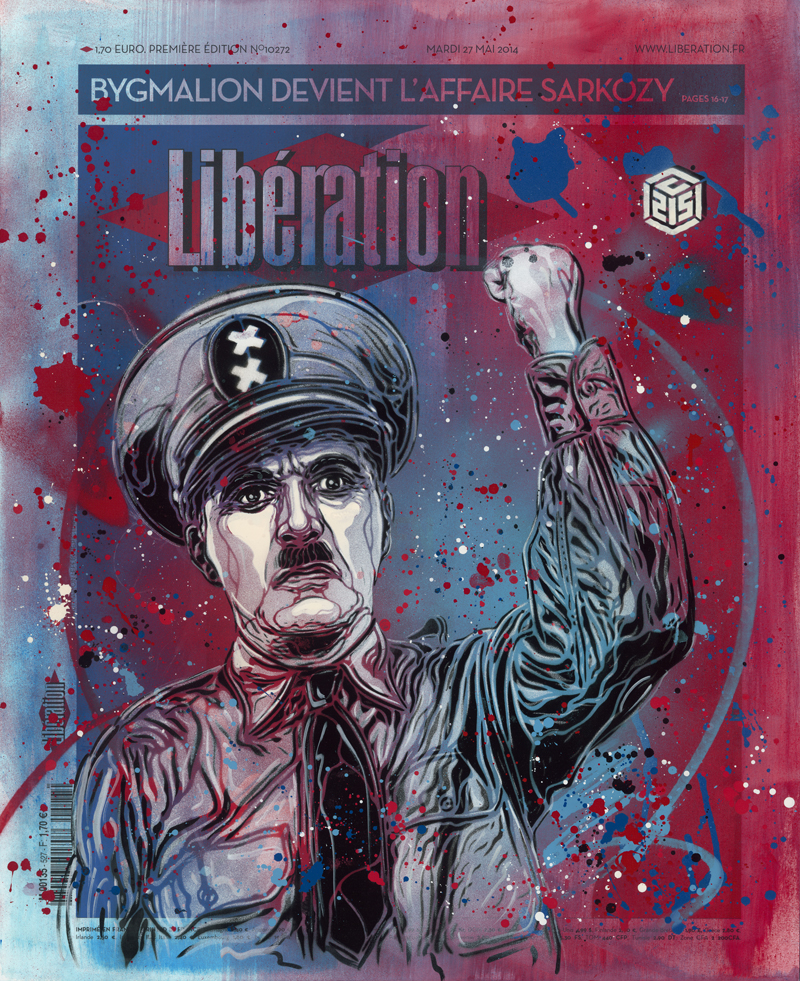 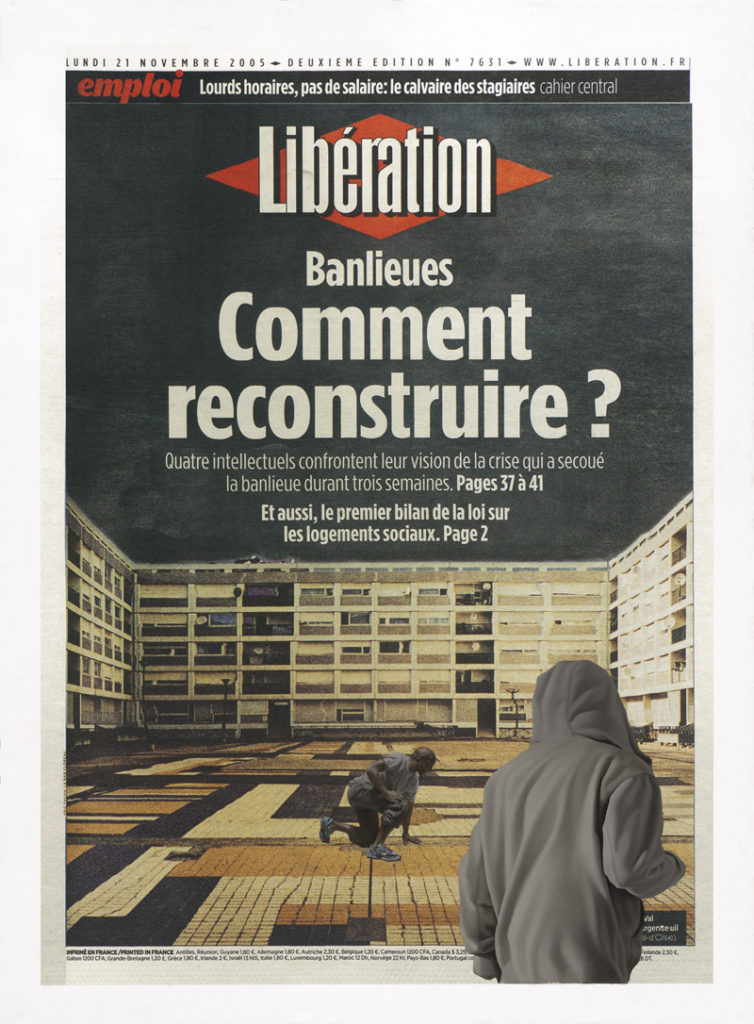